A Walk in Hoosick Falls

Forsaken storefronts line the street, mostly empty but for my reflection in the windows.  A few merchants remain — a children’s resale shop, a hair salon — glimpses of pride amidst the boarded doors and dusty windows of economic hurt.  A sign across the street reads, “I ❤︎ Hoosick” against a bed-sheet covered window. 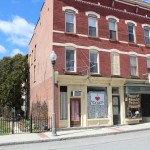 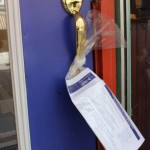 Information about Temporary Filtration and Flushing: 2/25/16

It’s late March now, months after the news about contamination of the village’s water system with perfuorooctanoic acid (PFOA) went public. The likely culprit, Saint-Gobain Performance Plastics, a manufacturing facility that uses Teflon to make coated plastic film, tape, and insulated wiring — one of the few remaining companies that still employ people in this town.

This town, like so many other former mill towns in northern New England and upstate New York— a place of 19th and early 20th century prosperity, now faded into a shadow of its former self. You’ve been to a town like this, perhaps even lived in a town like this. Grass-filled, uneven sidewalks between old Victorian homes. The lovingly maintained, brick bungalow library sits around the corner from a house with a crumbling porch. Faded plastic toys accumulated in the yard. Buds emerge on the trees after a long and difficult winter. The sign in front of St. Mark’s Episcopal Church reads, Please pray for our town to get through this water crisis.

The Saint-Gobain facility peeks through the trees from the Little League fields on Waterworks Road, where parents, probably grateful for the work, may gather after their shifts to cheer on the batter poised over home plate. The fields are empty now, except for a father pitching balls to his son. He lifts his head and watches me pass by. I wonder if he’s the kind of dad who would lean against the chain-linked fence and brag about his tough Teflon kid.

This morning, before I left home, my children wanted to know where I was headed. “Hoosick Falls?” my daughter said, “Who’s sick? That’s funny.”  It is, until it isn’t.

Just like all the other towns that have lived through a water crisis, it was the amount of cancer that made people wonder. Michael Hickey, the Hoosick Falls resident whose inquiry set current events into motion, lost both his father and grandmother to kidney cancer. He worries about his son. The water in both of their homes contained concentrations of PFOA well above the initial 0.4 ppb threshold limit set forth by the EPA, and since that testing, the EPA has revised its recommended limit to 0.1 ppb. Meanwhile, public health officials in Vermont, in response to a similar water crisis in nearby North Bennington, have used the same toxicologic studies to justify a 0.02 ppb PFOA standard.

The sluggish, inconsistent response must sting, like a reported case of domestic abuse that won’t be believed. And this is a matter of violence — just ask any cancer survivor about what the body must endure. I can’t help but think: if this crisis had been an act of terror, if someone had knowingly added PFOA to a public water supply, it would have been considered an act of war.

Later, when I am standing in the foyer of the Hoosick Township Historical Society building, studying photos of the community’s fallen soldiers from the Second World War, I will remember that Teflon’s inaugural application was for the Manhattan Project, the atomic bomb. I will remember that Teflon’s commercial utility was born from the science of intentional destruction, much like modern-day pesticides born from military nerve agents, and I will marvel at how intertwined the fingers of commerce and war have always been. I will mourn the dull, persistent echo of their intergenerational casualties. 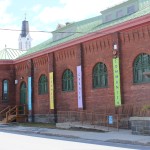 But now, I wait outside the Armory on Church Street, where officials from the New York Departments of Health and Environmental Conservation stand behind tables with flyers containing information about how little we really know about the health effects of PFOA. A young woman walks by on the sidewalk, pushing a stroller with a little boy, maybe two or three years old. She doesn’t go inside. Is she worried about the water that is dwelling inside his cells? Is she worried about his future? Maybe they’ve already been inside to talk with the experts, given samples of their blood. Maybe she’s just looking ahead, soldiering on, accepting their new normal.

The building is beautiful inside — an old gymnasium with a mile-high ceiling and light brick walls, that appear to have been dressed up for a reception. I am impressed by the art, the optimism of this space. Brightly colored quilts line the front of the gym, and everywhere I turn are hand-painted owls with the slogan “Hoosick Rising” — a redevelopment-focused antonym to the downtrodden Hoosick Falls. 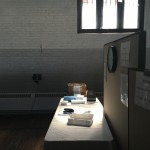 Across the room from the make-shift phlebotomy lab, where citizens may get their blood sampled for PFOA analysis, is a little wishing tree with positive messages from Hoosick Falls residents, about why they love their town. Here is where I find the soul of this place — neighbors expressing love and support for one another in the face of challenging times. You’ll never find a place with friendlier people, one postcard reads. Another card touts the value of the history of Hoosick Falls. The one that makes me pause: I ❤︎ HF because we have a great pool for kids to swim in. Love, Raegan. 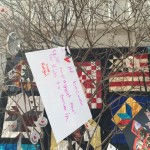 When I meet the DEC officials, I tell them that years ago, I used to be an environmental regulator myself. They relax into a comradely stance. We exchange technical details on the contaminant of concern. Yes, PFOA appears to be very soluble in water.  No, they don’t yet know how quickly it’ll break through the activated carbon filters — they will be monitoring them frequently, and there’s a feasibility study being conducted to identify alternative sources of drinking water for the area. No, they don’t believe there are any break-down products, but they’ve heard that several different perfluorinated compounds (PFCs) can degrade into PFOA. They are just now learning about these chemicals, which industries use them, how they behave when they’re released. There are probably multiple sites — Teflon-related manufacturing was the industry du jour. The agency is doing the best it can with the resources that it has.

I can feel the tension against resignation to the absurdity of the situation, how difficult it will be to get their horse to catch up with this runaway cart. It’s really a failure of the Toxic Substances Control Act, we all agree. Teflon has been in commercial use since the 1940s, its toxicologic profile held in secret by DuPont from early as the 1960s, and even now, ten years past an historic $10.25 million settlement between the EPA and DuPont, concerning DuPont’s failure to report the risk of harm that PFOA presents to human health and the environment — even now, the EPA lacks sufficient data to confidently adopt appropriate exposure standards for this ubiquitous synthetic compound.

One DEC official shares with me that earlier in the week, he received a request from the Commissioner’s Office, probably for the purpose of briefing a politician in the wake of this water crisis: “They said, ‘Please identify any public water systems in New York that are at risk of becoming polluted by any regulated and/or unregulated contaminants.’” He looks at me, shaking his head. All of them.

The woman from the Department of Health informs me that about 2,500 of the town’s 3,500 residents have requested to have their blood tested for PFOA. I ask her if there is a certain threshold concentration of PFOA in blood, above which residents will be referred for more rigorous medical monitoring. “We aren’t yet sure what the long-term plan for bio-monitoring will be,” she admits. “I guess it depends on what we find.”

But she doesn’t know what they will find. No one does. They can only guess, based upon the epidemiological studies and exposure data they have gathered from previous PFOA contamination cases in Ohio, West Virginia, and New Jersey.  I leave the Armory a little shaken by the sense of bearing witness to another accidental experiment.

On my way out the door, I notice a poster for the Hoosick Has Heart community blood drive. Donate blood. Save a life. Monday, April 11, at the Hoosick Falls Community Alliance Church.  The bright cold and piercing wind send shivers down my spine. I hope they get their sample results before then.