The Anxiety of Place 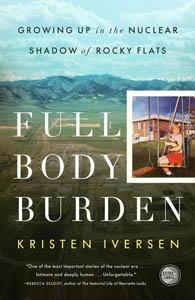 I recently finished reading Kristen Iversen’s book, Full Body Burden, and —even as a person familiar with the toxic secrets of government and industry— found the details of the Rocky Flats environmental legacy to be shocking.  Shocking, perhaps, because Iversen’s details are delivered so personally: her seemingly perfect hometown with room for children and horses to run and explore tainted by the invisible emissions of a secret nuclear weapons plant, rumors of covered-up contamination, and the cancer clusters to fuel them.  Woven into Iversen’s account of Rocky Flats is her own parallel tale of family erosion from her father’s alcoholism, shrouded in the stoicism of the family’s Norwegian heritage.  The dual narratives are powerful, delivering with unrelenting honesty the anxiety of knowing something deeply unsettling about your home, yet lacking the will or means to leave.

I do not personally know Kristen Iversen, but years ago, I worked with her sister, Karma, at the New Mexico Environment Department.  Our department was responsible for issuing wastewater discharge permits for all types of facilities: municipal wastewater treatment plants, dairies and food processing facilities, mining operations and other industrial facilities, including, among others, Los Alamos National Labs (LANL).

Neither Karma nor I oversaw any permits for LANL — she was a soil scientist who specialized in agricultural wastewater permits, and I was fresh out of graduate school, just getting my feet wet with permitting municipal and small-scale industrial wastewater discharges.  But I can recall the frustration of our more-senior colleagues who did manage permits for the Federal facilities, the secrecy shrouding activities at LANL and Sandia National Labs.  And I can remember talking with Karma about the rumors that floated around those sites: elevated rates of thyroid cancers, stories about dogs developing cancerous growths on their paws from their frolics in the adjacent canyons.

As a new State government employee, I was careful not to be blindly swayed by the hysteria of misguided risk perception.  There were always people with “too much time on their hands,” quick to bundle anecdotal tidbits with partial information to formulate wildly speculative conclusions about the dangers of site X or the devious intentions of company Y.  But after a few years of seasoning and a broadened portfolio of sites, I began to understand the paranoia.  I can recall thinking of more than a few of my sites that I could never live near there.  I could never live with the anxiety.  You know what they say about the restaurant business — once you know what goes on in the kitchen, you’ll be reluctant to eat out again. 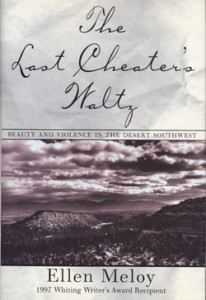 My foray into the history of Rocky Flats via Iversen’s Full Body Burden prompted me to revisit Ellen Meloy’s The Last Cheater’s Waltz and her anxiety of place.In The Last Cheater’s Waltz, Meloy is wrought with the guilt and paranoia of inhabiting and loving a place as beautiful as the redrock canyon country of southeastern Utah, and knowing its role in the widespread violence of nuclear weapons development and testing in the American Southwest.  Like a betrayed lover, Meloy traces the path of uranium mined from her Moab-area home to the weapons development facility in Los Alamos and the Trinity nuclear weapons test site in New Mexico, seeking some kind of — what?  Understanding? Redemption for choosing to live there despite its tainted past?

Meloy’s journey is an attempted exorcism of the anxiety of place — a theme most intriguing to those of us with academic inclinations, but imagine what that must feel like in the first person.  Imagine what it feels like to live in a place, or be from somewhere where you have a high probability of developing some condition, some malaise, just because you call that place home.  Love Canal.  Rocky Flats.  Fukashima.  Or imagine what it must be like to love a landscape with a hidden history as as cursed with death as  Hiroshima and Nagasaki.  These are no ordinary betrayals.  To most of us, these are abstract places, places to consider in the large-scale debate about environmental degradation.  But to some of us, these places are home.