I have spent much of my adult life trying to understand the science behind environmental issues. Like the cause-and-effect relationship between industrial effluent outfalls and subsurface contamination. Why, for example, the soil beneath a chlorinated solvent spill area can be ‘clean’ —without a detectible molecule of methyl-ethyl-death— when the ground water is so obviously impacted by an enormous plume. Or the scientific evidence of climate change, and how Greenland and Antarctic ice core samples confirm that our current carbon dioxide concentrations are well beyond the glacial and interglacial cycles that have been memorialized in the ice.

But no matter how savvy I think I am about the science, or how much people like me tend to believe that science is what’s going to save us, there is but one essential discipline whose role is really the driver of this bus.

Remember that phrase coined by political strategist James Carville in the 1990s? “It’s the economy, stupid.” Well, I can’t seem to get that phrase out of my head… again. And while Carville’s point back then may have been to emphasize the importance of the struggling economy in the 1992 presidential election, my point in resurrecting the phrase is this: It doesn’t matter how the science explains the cause-and-effect relationships involved in an environmental health crisis. What really matters is the why it happened — which, unsurprisingly, is almost always a matter of economics.

Take Flint, MI, for instance. Sure, I understand the science behind what’s happened:  Water drawn from the Flint River and delivered to Flint’s municipal water customers from spring of 2014 on was more corrosive than the City of Detroit water they had been using prior to then, so the new water literally ate through their aging infrastructure, causing lead and other particulates to pour from their taps. Chemistry 101, right?

But the science doesn’t explain how Flint River water got into the pipes in the first place, nor does it explain why months passed without any corrective action, despite complaints from residents about the visible contamination of their drinking water. Science also fails to provide an acceptable explanation for why Flint pediatrician Mona Hanna-Attisha was belittled and attacked when she released her findings that the percentage of Flint children with abnormally high blood lead levels had doubled since the City switched its water supply. Or why it wasn’t until late December and early January that authorities declared the continued lead poisoning of Flint’s children as the emergency that it was.

More than a year of daily, chronic exposure to lead-contaminated water has occurred in hundreds of Flint households — in a predominately African American community where over 40% of the population lives below the poverty level. Science? No, I think another discipline might be at play. You can almost see the words in the thought bubbles hanging above the City and State officials’ heads: It’s just for a few more months. Really, what difference does it make?

There’s an important term that is often tossed around in civil discourse about economics: “moral hazard.”  Moral hazard refers to the elevated risks one party might take in an economic transaction because another party will bear the negative consequences of those risks. We heard a lot about moral hazard around the Wall Street bank bailouts in 2008, and we often hear conservative grumbling about the moral hazards of the Affordable Care Act —or any social service program, for that matter— and how it isn’t fair for the taxpayers to pay for someone else’s (potentially irresponsible) personal choices.

But the concept of moral hazard is seldom discussed around matters of environmental or personal harm, when the asymmetry of risk involves something other than cold hard cash. Which seems misguided, since the underlying presence of unfairness is the same. Think about it: What if the moral hazard threatens one party’s ability to breathe? The ability to drink clean water? The ability to go to school or play in a city park without getting shot? Where are the conservatives then?

I don’t present this idea as a theoretical argument, because unabated moral hazards are yielding environmental and human health tragedies as we speak. Consider for a moment the economic equation controlling gun regulation in this country. 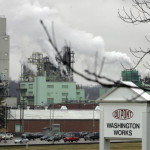 Consider the matter of DuPont in Parkersburg, WV, where, for decades, the company dumped thousands of tons of perfluorooctanioc acid waste (PFOA, formerly known as C8, the main ingredient in Teflon) into the Ohio River, unlined ponds and beyond, causing widespread contamination of surface and drinking water resources in Parkersburg and surrounding communities. DuPont not only exposed thousands of people to a toxic chemical, they actively concealed the known health effects of PFOA (identified in their own internal toxicology studies) for decades, so they could continue to bring in over $1 billion per year in profit from their highly successful Teflon products (read the recent New York Times article about the case here, a Huffington Post article about it here, and a slightly older one from The Intercept here).

DuPont had even developed a different chemical to replace PFOA in the early 1990s—one that was reportedly less persistent in the environment and stayed in the body for a shorter duration of time— but the company ultimately decided against replacement because the economic risk was too great.  Of course, when the exposure imposed upon workers of DuPont and the 70,000 people served by PFOA-tainted drinking water systems is factored into the equation, along with the link between PFOA and birth defects, kidney cancer, testicular cancer, thyroid disease, and other serious ailments, one wonders where the asymmetry of risk really falls.

—Which brings me back to my point: This is an economic equation, a deeply unbalanced one that is designed to limit the loss of profits, the loss of dollars and cents. Until we start attaching appropriate value to the lives at stake in these institutional transactions, I’m afraid the science is never going to be able to catch up to our inevitable loss.