Vivian Gornick’s Use of Character in Fierce Attachments 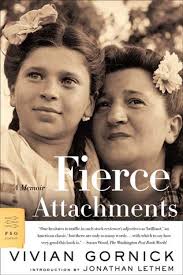 Vivian Gornick’s Fierce Attachments is a coarse, unflinching memoir about the complex relationship between the author and her fierce, judgmental mother — and how the intellectual and emotional clashes between them mirror the author’s own internal struggles with love and marriage, work, and her identity as a woman.  In the book, Gornick invites the reader along walks in Manhattan with her aging mother, where we witness them argue and recreate versions of their connected past.  Alternating between present-tense walking scenes and analysis of her history, Gornick paints a textured picture of her life in New York — a holdfast life with a controlling mother, which she can neither embrace nor fully escape.

Born and raised the Bronx, Gornick grew up in a tight-knit community of socialist Jewish immigrants, and spent most of her formative years in the company of the women in her tenement.  Her story is framed through her recollection of, and interactions with these characters, the bulk of which are devoted to her dominating mother and the alluring widow, Nettie Levine, who lived across the hall.  When she was thirteen, Gornick’s father died unexpectedly of a heart attack, plunging her household into the abyss of her mother’s grief, and setting the stage for the conflict that would occur between the opposing forces to Gornick’s developing feminine ideals.  This, in essence, is the Fierce Attachments story.

Though Gornick’s mother is the leading antagonist to her narrator, the character of Nettie Levine plays an important supporting role in the evolution of Gornick’s identity.  Indeed, the two characters — Nettie and Gornick’s mother — come to represent the opposing feminine ideals that act upon the narrator, maintaining tension throughout the book.  This literary craft blog post examines Gornick’s description and portrayal of these two specific characters, and how she uses them to represent broader issues of the contradictory feminine self.

The Mother
From the beginning, Gornick’s mother is introduced as a bold woman, unabashed in her quick judgment and open criticism of others.  To the neighbor waiting outside her apartment while her husband showers and readies himself for sex, Gornick’s mother utters to the woman, “Drucker, you’re a whore,” equating the woman’s obligatory sex with a husband she doesn’t love with the sexual transactions between a man and a prostitute (p. 3).  In this single introductory paragraph, Gornick has shown us, through scene and dialogue, not only her mother’s sharp edge, but the elitist attitude she carries concerning marriage and authentic love.  Gornick also captures her mother’s intellectual snobbishness with brief sound-bites of dialogue:

My mother was distinguished in the building by her unaccented English and the certainty of her manner… Her manner… was that of a superior person embarrassed by the childlike behavior of her inferiors. “Such foolishness,” Or, “That’s ridiculous,” she would rap out sharply when a tale she considered base or ignorant was repeated to her. She seemed never to be troubled by the notion that there might be two sides to a story, or more than one interpretation of an event. She knew that, compared with the women around her, she was “developed” — a person of higher thought and feeling — so what was there to think about?  “Developed” was one of her favorite words. If Mrs. Zimmerman spoke loudly in the hall on a Saturday morning,… inevitably, my mother would shake her head and pronounce, “An undeveloped woman.”  If someone make a crack about the schvartzes, my mother would carefully explain to me that such sentiments were “undeveloped.” (p. 11-12)

Gornick further describes her mother as a woman displaced, a woman with the skill and inner drive to work outside the home and contribute to a larger cause, but whose education and situation condemned her to domesticity:

Gornick’s words fully illustrate the paradox of her mother’s married life: a woman capable of so much more than domestic work, yet dutifully performing the tasks beneath her with precision and with skill.

It is this sense of duty that defines Gornick’s mother for the reader — a sense of marital duty that eclipses one’s personal intellectual ambition.  The marriage between Gornick’s parents is a happy one, its tranquility placed upon a pedestal for all the other women to see; yet Gornick notices — in comparison between her parents and other seemingly less functional couples — that this compatibility is more emotional than physical.  Upon an accidental glimpse of a friend’s parents having sex, Gornick observes: “So there were the Kerners, riddled with hate, secretly locked together in sexual spasm, and there were my parents, loving each other, while their bed rode chastely about in open space.” (p. 30)

Such are the feminine standards represented in the mother character: intellectual superiority, self-reliance, and dutiful service — but only in the face of true, emotional love.  Succumbing to one’s passions — whether physical or intellectual — at the expense of one’s familial duties, would be considerably “undeveloped.”

Nettie Levine
By sharp contrast, Nettie Levine, the Gentile woman living across the hall and recently widowed by her Jewish husband, is a sensual, alluring individual, whose domestic ineptitude and exclusion from the Jewish tenement cliques is tempered by her calculating sexual energy.  Unlike Gornick’s mother, whose character is largely defined by dialogue, Nettie is presented to the reader as a visual image, her physical beauty a defining element of her persona.  Gornick writes of her first encounter with Nettie, upon accidentally running into her in the hallway:

I bent, blushing, to help her retrieve the bags scattered across the landing and saw that she had bright red hair piled high on her head in a pompadour and streaming down her back and over her shoulders.  Her features were narrow and pointed (the eyes almond-shaped, the mouth and nose thin and sharp), and her shoulders were wide but she was slim.  She reminded me of the pictures of Greta Garbo. My heart began to pound. I had never before seen a beautiful woman. (p. 34)

And while Gornick’s mother is distinguished by smart tongue and superior capabilities, Nettie is alternatively defined by her relative silence and all that she can’t do:

A woman whose sexy good looks brought her darting glances of envy and curiosity, [Nettie] seemed to value inordinately the life of every respectable dowd.  She praised by mother lavishly for her housewifely skills — her ability to makes small wages go far, always have the house smelling nice and the children content to be at home — as though these skills were a treasure, a precious dowry that had been denied her, and symbolized a life from which she had been shut out. (p. 36)

Nettie, it quickly developed, had no gift for mothering… Nettie had been trained to attract, not to domesticate, and was at a permanent loss.  She could not master the art of mashed-up food, boiled diapers, baths in the kitchen sink…

… I have this memory of [the baby] in Nettie’s right arm, his diaper full of shit, his face smeared with the remnants of the last two meals, his tiny fingers clutching a strand of red hair, holding on for dear life while she whirls about in silent alarm. (p. 49)

Again, Gornick’s presentation of Nettie’s character is dominated by visual images of her physical beauty and domestic failures.  Yet, despite her intellectual emptiness, Nettie is equipped with a sexual power that permeates the room, and unsurprisingly, comes to rely on this power to survive her “outsider” status.  Here, Gornick employs gesture to develop this particular aspect of Nettie’s character:

She had a way of walking up the block that had made me uncomfortable from the time I was ten years old.  She walked like no other woman in the neighborhood… Her walk was slow and deliberate… Everyone knew this woman was going nowhere, that she was walking to walk, walking to feel the effect she had on the street.  Her walk insisted on the flesh beneath the clothes. It said, “This body has the power to make you want.” There was nothing like her for a thousand miles around. (p. 98-99)

Indeed, Nettie’s ability to harness her sexual power and turn it into a commodity is the underlying premise of the feminine ideal her character represents.  With visual images and gestures, Gornick establishes through Nettie’s persona, the contrasting feminine standards to Gornick’s intellectual, dutiful mother.  Nettie’s feminine ideal emphasizes beauty over intellect, attraction over self-reliance, impulse over duty, and — above all — sex over love.

In the book, the tension between these opposing feminine forces is played out in the narrator’s mind, in her heart, in her decisions.  The reader sees her struggle with the virtues and risks of both ideals as she matures into a young woman.  But the conflict comes to a head when Nettie’s promiscuous behavior with men finally draws criticism from Gornick’s sharp-tongued mother.  “You know what they say about you on the street?” she taunts one day in the kitchen.  Nettie gets up to leave, and Gornick is compelled to stand and defend her.  In an apologetic gesture, Gornick’s mother places her hands on Nettie, when:

… Nettie brushed the fingers from her arm and with one hand on the doorknob, she hissed, “You know he always liked me.”

For a moment that lasted a hundred years we remained as we were, the three of us, grouped in the tiny foyer. No one moved. My mouth opened and stayed open.  Nettie’s hand remained on the doorknob. Mama’s fingers touched the air. The afternoon light, filled with threat and anxiety, fell on us from the distant kitchen window.

She slept with my father, I thought, and an immense excitement swept my body.

“You whore,” my mother whispered. “You filthy whore. Get out of this house.”

Nettie slammed out the door and Mama ran through the apartment. She flung herself down on the couch and wept hard, broken tears. Torn between pity and fascination, I watched her as long as she lay there. She cried for hours. (p. 119-120)

In that moment, the reader sees that everything Gornick’s mother stood for — her worship of romantic love and marriage — was not only abandoned by her husband’s early death, but was knowingly betrayed by Nettie and all she represented: meaningless sexual impulse.

The dramatic conflict between these two characters symbolizes the ongoing tension within Gornick’s own mind, between their respective feminine ideals.  As she matures into adulthood, Gornick continues to wrestle the opposing standards of Nettie and her mother.  She is both and insider and an outsider, and intellectual and a dreamer, a believer of romantic love and an impulsive sexual creature.  She is ultimately a product of both influential women.  Gornick’s skill in uniquely developing each character (i.e., defining her intellectual mother through her sharp-witted dialogue, and crafting Nettie through images and gestures) enables the reader to fully appreciate the opposing forces acting upon the narrator, and feel the battle raging within herself as she seeks to understand her own paradoxical identity.