Tracing the DNA of a Story to the Sentence Level: Use of Symbolic Detail in Alfred Kazin’s A Walker in the City 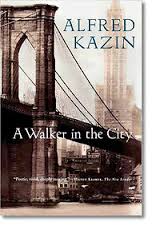 Alfred Kazin’s A Walker in the City is a classic memoir recalling the author’s childhood in Brownsville, the Jewish immigrant neighborhood of Brooklyn, New York in the decade before the Depression.  Richly textured with vivid details, A Walker in the City is a slow amble through the corridor of Kazin’s youth, and is widely recognized as a meditation on culture, identity, and the inherent tension between the comfort of belonging and the need to escape the boundaries of one’s insulated world.  From the sewing machine in his mother’s kitchen to the pushcarts on Belmont Avenue, from the ritual of school and synagogue, to the subway station and ‘Beyond,’ A Walker in the City is both a push against the poor immigrant conditions Kazin feels he must escape, and a tender recollection of the community from which he came.

Kazin’s prose is dense and detailed in its narration, and the meat and bones of its themes — belonging verses finding oneself, preservation of immigrant culture verses assimilating into America — are embellished with specific images, particular characters, and well-placed dialogue.  Indeed, A Walker in the City is a study in the use of details to enhance one’s prose.  This literary craft blog post explores Kazin’s placement of details throughout his text, and how these features support the underlying themes.

One such scene, in which Kazin is describing the buildings and establishments around his old house on the block, is abundant with details:

The shoemaker is still there; the old laundry is now a printing shop.  Next to it is the twin of our old house, connected with ours below the intervening stores by a long common cellar.  As I look at the iron grillwork over the glass door, I think of the dark-faced girl who used to stand on that stoop night after night watching for her Italian boy friend.  Her widowed mother, dressed always in black, a fat meek woman with a clubfoot, was so horrified by the affair that she went to the neighbors for help.  The quarrels of mother and daughter could be heard all over the street.  “How can you go around with an Italian? How can you think of it? You’re unnatural!  You’re draining the blood straight away from my heart!”  Night after night she would sit at her window, watching the girl go off with her Italyéner — ominous word that contained all her fear of the Gentiles — and weep. (p. 80-81)

Not only does the introduction of a lovesick Jewish girl waiting on the stoop for her forbidden Italian boyfriend make the place seem more authentic, the details about her anxious Jewish mother reveal the very theme of Kazin’s memoir.  The fact that she’s a widow, has a club foot, and is always dressed in black — these details solidify the reader’s image of a traditional Jewish woman.  Taken together with the dialogue (“How can you go around with an Italian?  You’re unnatural!”), the specifics about the Jewish mother underscore the ongoing tension between generations about the boundaries of their community.  The inclusion of these details clearly illustrate for the reader, that Jewish immigrants who settled and raised families in America did so with the hopes of a better life, but dreaded the assimilation of their children and the abandonment of their own true heritage.  To them, Brownsville was Jewish, Brownsville was “us,” and the world beyond it was “them.”  But to Kazin, the girl on the stoop, and all of their peers, the world beyond held their dreams.  The world beyond was America.

The push and pull between Brownsville and Beyond, between Jewish and Gentile, and “us” verses “them” is carried throughout the book, but in no other place is this tension so beautifully illustrated as in Kazin’s discussion of Mrs. Solovey.  Mrs. Solovey is the wife of the pharmacist, a lovely Russian woman whose blonde-ness and dreamy demeanor is drawn in sharp contrast with her bitter and scornful husband.  Kazin is in love with Mrs. Solovey, “her air of not being quite related to anything around her” pleasing him most, as it distinguishes her from the dreariness that Brownsville represents.  Kazin writes, “[Their] store went to pieces, the two little girls in their foreign clothes played jacks all afternoon long on the front steps.  Mr. Solovey denounced us with his eyes, and Mrs. Solovey walked among us in her dream of a better life.” (p. 124).  In these details — Mr. Solovey’s scornful eye, his disregard for the family business, the Solovey girls contentedly playing jacks all day on the steps — Kazin illustrates the defeated nature of Brownsville life, and the way in which Mrs. Solovey is different.

Her differences are further revealed when she comes to Kazin’s home, seeking a new dress from Kazin’s seamstress mother.  As she waits, she notices the young narrator studying French, and begins a conversation with him:

“I suppose you are learning French only to read? The way you do everything! But that is a mistake, I can assure you! It is necessary to speak, to speak!  Think how you would be happy to speak French well!  To speak a foreign language is to depart from yourself.  Do you not think it is tiresome to speak the same language al the time? Their language! To feel that you are in a kind of prison, where the words you speak every day are like the walls of your cell? To know with every word that you are the same, and no other, and that it is difficult to escape? But when I speak French to you I have the sensation that for a moment I have left, and I am happy.” (p. 127)

They continue conversing in French, during which Mrs. Solovey reveals that she is from Odessa, near the Black Sea, and has lived in Russia, France, Italy, and Palestine.  Kazin, surprised by her worldliness, asks, “Why did you come here?”

She looked at me for a moment.  I could not tell what she felt, or how much I had betrayed.  But in some way my question wearied her.  She rose, made a strange stiff little bow, and went out.  (p. 130)

Kazin never spoke with her again, and some time later, learned that she had killed herself with gas from the oven.

It was raining the day they buried her.  Because she was a suicide, the rabbi was reluctant to say the necessary prayers inside the synagogue.  But they prevailed upon him to come out on the porch, and looking down on the hearse as it waited in the street, he intoned the service over her coffin. It was wrapped in the blue and white flag with a Star of David at the head.  (p. 131)

These passages about Mrs. Solovey employ the most effective use of detail.  Not only is she a character in Kazin’s childhood home, her specific characteristics, and the nature of her death symbolize the issues central to Kazin’s theme.  Mrs. Solovey is an anomaly in Brownsville, a blonde, worldly woman who likens speaking a foreign language to escaping a prison cell.  She, too, feels trapped by her existence in Brownsville, and longs for a better life.  But Brownsville suffocates her, in life and in death.  Suicide by gas, rain at the funeral, the Star of David draped over the head of her coffin — all of these details symbolize the oppression of this place.  And through these specifics, Kazin conveys his need to walk on.