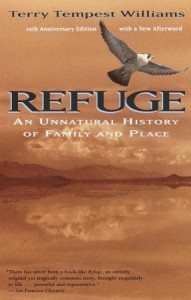 Terry Tempest Williams’ Refuge: An Unnatural History of Family and Place is a touchstone for the use of the natural landscape to tell a human story.  Williams’ book, released in 1991 to widespread literary acclaim, weaves the story of her mother’s final struggle with ovarian cancer with the simultaneous flooding of the Bear River Migratory Bird Refuge during the unprecedented rise of the Great Salt Lake in 1983.  Through sensory-filled stories of salt marshes and sand, family and birdsong in the Utah desert, Williams guides us through the deeply personal tragedy of losing her most cherished places of refuge — her mother and the place where the birds come to rest.

Williams’ account is carefully braided, the rise of the Great Salt Lake and its threat to the bird refuge skillfully juxtaposed against the rise of a deadly cancerous tumor in her mother’s abdomen.  With each rising lake interval, Williams parallels her mother’s peril with that of every species threatened by the flood.  This metaphor is carried throughout the book, as she weaves fragmented strands of the two narratives together to contemplate natural cycles, the inevitability of death, and the unnatural systems our culture employs to prevent them both.  We experience first hand the anxiety and heartbreak of every threatened bird, every stage of her mother’s disease, and are left with the intimate knowledge of mourning the loss of wildlife and place intertwined with the loss of one’s mother.  Williams’ emotional journey illustrates both our reluctance to accept even the most natural of changes, and the lengths to which we go to resist them.

Refuge is a lyric work, a contemporary form published nearly a decade before the lyric essay’s widespread recognition.  And perhaps that’s what made it so successful — it was prose poetry before its time, structured in a way that enabled history, biology, and geography to enhance a personal narrative.  This literary craft blog post explores how Williams skillfully transitions from one story strand to another, using white space, common words, images, and ideas as points of contact for effectively weaving one section into another.

Williams introduces the metaphor between the flooding of the bird refuge and her mother’s death from cancer in the Prologue of the book:

Most of the women in my family are dead.  Cancer. At thirty-four, I became the matriarch of my family.  The losses I encountered at the Bear River Migratory Bird Refuge as Great Salt Lake was rising helped me to face the losses within my family.  When most people had given up on the Refuge, saying the birds were gone, I was drawn further into its essence.  In the same way that when someone is dying many retreat, I chose to stay. (p. 4)

The early establishment of this metaphor provides the well from which Williams will draw to nourish the connective tissue binding her scientific and observation-based sections on the bird refuge and the Great Salt Lake with her more candid personal reflections on family, illness, and death.  For instance, in her second chapter, after having introduced the reader to the Great Salt Lake and the connection that she and the lake have to the refuge, Williams is able to seamlessly transition into the discovery of her mother’s illness:

… The long-legged birds with their eyes focused down transform a seemingly sterile world into a fecund one.  It is here in the marshes that I seal my relationship to Great Salt Lake.

I could never have anticipated its rise.

My mother was aware of a rise on the left side of her abdomen.  I was deep in dream.  This particular episode found me hiding beneath my grandmother’s bed as eight black helicopters flew toward the house.  I knew we were in danger. (p. 22)

Here, Williams employs white space and the word rise as the thread that connects these two fragments together — fragments that might otherwise seem disjointed, were it not for her prior establishment of the symbolic relationship between the two.

Williams uses the same technique later in the book to transition from her personal narrative to a section that discusses the history of Mormon religion and its connection to the land.  In this instance, Williams describes a scene in which her family learns that surgery and chemotherapy have failed to eliminate cancer from her mother’s body.  Her mother, originally opposed to undergoing treatment, unleashes anger at Williams and Williams’ father, saying, “I could have handled this, why couldn’t you?”  Williams is heartbroken, crippled with guilt:

… We had wanted a cure for Mother for ourselves, so we could get one with our lives.  What we had forgotten was that she was living hers.

I fled for Bear River, for the birds, wishing someone would rescue me.

The California gulls rescued the Mormons in 1848 from losing their crops to crickets.  The gull has become folklore.  It is a story we know well… (p. 68-9)

Again, the insertion of a little white space, coupled with the use of a common word between the sections (in this case, rescue), enables Williams to gently pivot from an emotionally charged family scene to a relevant historical anecdote about one of the refuge’s resident birds.  The effect is not only an effective transition from one narrative to another; it is a mechanism for the slowing of pace, and the relief of tension in the prose itself.

Williams utilizes white space well in Refuge, the vacancy of words allowing the reader to draw the connections between her fragments for him or herself.  We recognize it as a pattern, the more difficult the circumstances become, the more white space we see.  Toward the middle and end of the book, as the stakes for the refuge rise, along with the tension in her family, Williams’ prose become more fragmented.  The white space increases, and the connective tissue between sections is grounded in images and ideas:

Mother.  She is preoccupied.  Yesterday, on the telephone, she said she didn’t think she could make the family backpacking trip in the Tetons scheduled for summer.

“I think I may have pulled some muscles in my stomach,” she said.

I want to believe her.

It rains and rains.  Great Salt Lake continues to rise.

Eudora Welty, when asked what causes she would support, replied, “Peace, education, conservation, and quiet.”

As disjointed as these fragments seem, the reader easily follows the prose.  The white spaces, the symbolic rain and rising lake, the need for quiet all paint a larger picture: Williams’ mother is dying, and there is nothing that they can do.  The conclusion, though not spelled out, is easily understood.

In Refuge, Terry Tempest Williams has masterfully illustrated the potential of the fragmented approach, the importance of finessing transitions, and the beauty of lyric prose.  Her use of white space, common words between sections, and relevant images are an effective mechanism for manipulating pace, conveying emotion, relieving tension, and solidifying theme in the body of her prose.