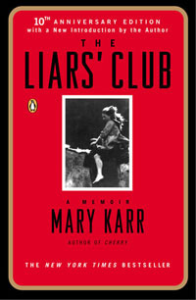 Mary Karr’s The Liar’s Club is a searingly honest, sharp-humored memoir about growing up in a deeply dysfunctional family, in the oil refinery culture of east Texas.  In The Liar’s Club, Karr tells incredible stories of being raised by a quick-tempered, hard-drinking, blue collar father and a profoundly troubled mother whose addiction to diet pills, booze and marriage made her prone to psychotic episodes.  Karr’s childhood was wrought with fighting and violence, fueling the myriad of bad experiences shared between Karr and her sister, Lecia.  Together, they endured a hurricane, parental neglect, emotional abuse, sexual assault, and even bearing witness to their mother’s nervous breakdown.  Yet what makes this memoir so unforgettable are not just the shocking events of Karr’s childhood, but the skills that she brings to her storytelling.

Much like the title — referencing a name someone had coined for the drinking and story-telling habits of Karr’s father and friends — Karr’s narration is homegrown, her stories woven with funny details, east Texas dialect, and Oh-by-the-way asides.  The entire book reads like its own description of Karr’s daddy telling another tall tale to the boys at the bar, yet the reader can feel the sophistication of her craft.  Karr’s poetic skill is evident in her prose, cutting scenes and images with scalpel-like precision.   But that is the obvious gift.  Even more impressive are the subtle techniques Karr uses to elevate the significance of certain scenes for the reader.  This literary craft blog post explores how Karr purposely employs a shift in verb tense, from past to present, to enhance the dramatic effect, and therefore importance, of some of her most riveting childhood memories.

The first place that Karr changes to the present tense is in Chapter 6, in which Karr’s daddy, Pete, is telling the Liar’s Club a tall tale about how his own father died.  The scene comes alive with this shift, not only allowing the reader to experience first hand the unrefined charisma of Pete Karr, but the profound effect of the subject of death on the young narrator.  Having discovered her grandmother dead after a long struggle with cancer, and knowing her mother is suicidally depressed, death is monumental concept for Karr at this time in her life; reading her reaction to her father’s story in the present tense effectively binds her to the reader.  We can feel her fearing the possibility of her mother’s self-inflicted death:

For a minute, I even think about Mother propped up in her bed night and day… Then it’s her face slack-jawed I see in place of Grandma’s, her arm hanging down that the ants are running on.  I’ve plumb forgot where I am for an instant, which is how a good lie should take you.  At the same time, I’m more where I was inside myself than before Daddy started talking, which is how lies can tell the truth. (p. 124)

Karr shifts from past to present tense about six times throughout the book, most poignantly right before the scenes in which her mother falls into violent psychotic episodes.  For instance, in Karr’s recollection of a particularly bad birthday, she gently changes verb tense to cue the reader for a white-knuckled scene ahead:

Mother was touching the last match to the last candle when I came in… Lecia’s face next to hers was as blank as a shovel. She said, go on and make a wish, you little turd. I squinted my eyes as hard as I could and wished silently to go and live some other where forever, with a brand new family like on Leave It to Beaver. Then I sucked up as much air as I could and blew the whole house dark.

I don’t remember our family driving across the Orange Bridge to get to the Bridge City Cafe that evening. Nor do I remember eating the barbecued crabs…I don’t remember how much Mother drank…

My memory comes back into focus when we’re drawing close to the Orange Bridge on the way home.  From my spot in the backseat, I can see a sliver of Daddy’s hatchet-shaped profile — his hawk-beak nose and square jaw. (p. 137)

From there, Karr shows us her drunken mother’s rage in the car, and how she grabs the steering wheel and attempts to drive the whole family off the edge of the bridge.  In present tense, the scene is raw and terrifying, like in a movie.  If she hadn’t switched from the past tense, Karr’s prose wouldn’t have properly commanded the moment.

Karr also uses this technique before sharing with the reader her sexual assault at age eight:

More nights scrolled past, and days so gray and grainy that not one stands unblurred from any other, till I get sick one day and the grown man who allegedly comes to care for me winds up putting his dick in my eight-year-old mouth.  In fact, the whole blank winter sort of gathers around that incident like a storm cloud getting dense and heavy.

With this transition, the reader can see what’s coming.  We’re in the moment, and our hearts are beating fast, because we know that Karr is about to show us the scene that her narrator so casually mentions as some man “putting his dick in [her] eight-year-old mouth.”

This particular example illustrates perfectly why Karr’s subtle transition from the past to present tense during critical parts of The Liar’s Club is so effective.  The present tense experience allows the reader to feel what Karr went through during the most traumatic moments of her life; it is the crack in the door that allows us to see beyond the cynical, smart-mouthed voice her narrator uses for defense.  By engaging the reader with the present tense, Karr is effectively showing us in a way that her words could never say, the true pain she felt in living through those events.