On that Pussy Thing

I spent half the day trying to think about what I wanted to write, and nothing came. Nothing came because all the blood in my body is pumping to that fist-sized space above my gut. My anxious space. My anger space.

I write a lot about toxicity. Normally I would find something to say about some recent environmental mishap, some injustice that has occurred in some community that shoulders a disproportionate amount of risk from the environmental hazards in our world. Contaminated water from a chemical spill, an abandoned factory. Or the tactics that are being employed to force construction of natural gas pipeline across tribal lands in North Dakota. 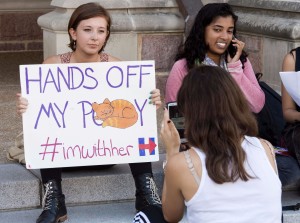 In truth, I can think of nothing more acutely toxic than this last week of the election season — the degree of indecency Donald Trump and his supporters have imposed upon the American people, the virulence of his campaign to our democratic ideals. His racist rhetoric, his vulgar language, his bragging about sexual assault. But even more than that, it’s his unapologetic response to the criticism of his actions and words: Just telling it like it is, he says. And in defense of his lewd video: It’s just locker room talk.

I was in the seventh grade the first time I heard someone make a comment about my body. My oldest daughter is in the seventh grade now, and even though we’ve talked about it, I keep watching her to see if the same thing has happened to her. I’ll know it when I see it: the slouch, the rounded shoulders to try and diminish a budding chest.

In high school, I heard the sexual comments spoken about me, felt the leers as I walked by — just like so many other young women in my school. You quickly learn your currency from the feedback that you get. They get metabolized, these threads, become intricately woven into one’s self-worth.

During my junior year, some man found my phone number and called me in the evenings, posing as a researcher from Ohio State. He was studying the sexual behaviors of adolescents, he said, would I mind answering a few questions for his research survey?

I wasn’t the only one he called.

In college I worked for a man who actually told me, “If I had a body like yours, I’d walk around naked all day.” This from the man who signed my timesheet at the end of the week.

But I said nothing, did nothing to assert my humanity. God forbid someone think of me as sensitive, as emotional, as female — that would only prove that I was weak.

Except that it isn’t. Because common and normal are two completely different things.

My husband says he has this exact conversation with his patients all the time. How’s my cholesterol, Doc? It’s average — isn’t that considered normal?

And he will explain that although their cholesterol may be average for this population, that doesn’t mean it’s normal. It’s a common number to have, he’ll say. But it’s also common to die of heart disease in this country.

When I worked as an environmental regulator in Connecticut, I learned that there are portions of the state that have been so severely impacted by centuries of industrial activity, that the state has effectively rendered those ground water resources as unfit for human consumption. Places where contamination is commonplace. Permanently tainted areas with layered, co-mingled contaminant plumes from years of industrial abuse. Companies who impact ground water in these areas don’t need to clean to health-based standards. They are excused from the rigor of this work — after all, the damage has already been done.

All men talk this way in the locker room, he says.

In other words, it’s commonplace, this toxicity. I deserve to get a free pass.

Except that common ≠ normal. And I would expect the public forum surrounding our selection of the next President of the United States to be a safe place, one in which all of us can engage as equals — not a space where years of prior contamination implies permission to engage in abusive behavior and accelerate, as Republican Strategist Steve Schmidt so aptly described it, “intellectual rot.”

But let’s just take a moment and return to the contamination— the places where Trump’s rhetoric is considered “normal.” Yesterday I came across the graphic that many of you have probably already seen — two maps of the United States with predicted election results: 1) if only men voted, and 2) if only women voted.  What strikes me about these pictures is not the apparent widespread misogyny felt by thousands of men in our country, as evidenced by their support of a candidate like Donald Trump, but the acceptance of that misogyny by so many American women. 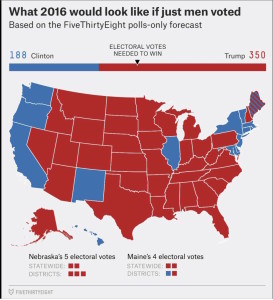 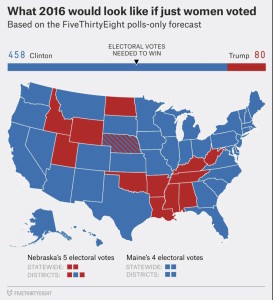 An acquaintance remarked of the map, “I live in the It’s-ok-to-grab-my-pussy-without-consent Belt” — an apt observation of the geographic distribution of female Trump supporters and its overlap with the geographic distribution of certain ultra-conservative religious sectors in this country. Which made me think: Thousands of women in this country are in an abusive relationship… with their church.

I grew up in a home where the Bible was read every evening after dinner. For dessert, I was served words about God’s power and love and forgiveness, but I was also forced to digest words about a woman’s subservience to her husband, about her times of impurity and her relative value compared to men. Whether or not this was intended by my father is a matter for another debate — but the fact is that I listened. I listened really well.

I recently completed training to volunteer for WomenSafe, a local organization committed to ending domestic and sexual violence in our community. As part of the training, volunteers were invited to review the timeline of events and policies that have impacted the role and perception of women in our culture and society. You can bet that timeline began in Biblical times.

All of which is to say that this toxicity can take years, centuries even, to accumulate to the levels we are experiencing today. The seeds can start in our own houses, sometimes even our houses of worship. But in free, democratic societies such as ours, women aren’t things you can pollute and throw away.