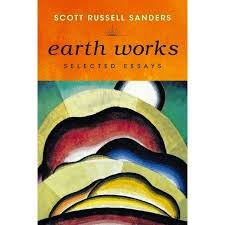 Scott Russell Sanders’ Earth Works: Selected Essays is a book of the author’s collected works spanning thirty years of his writing career, and covering a wide range of topics and issues, including his Midwestern upbringing, his father’s alcoholism, war, spirituality, human connection to the natural world, fatherhood, family, and death, among others.  Sanders is a traditional personal essayist, in that his narratives illustrate the root of the “essay” concept: to try, or attempt to understand without knowing that success is at hand.  His chosen topics are ambitious ones, questions whose answers are ever elusive: Why is there war?  (“At Play in the Paradise of Bombs”), Why couldn’t my father stop drinking? (“Under the Influence”), Why are women treated differently than men (“Looking at Women”), What is the power that wills us to live? (“The Force of Spirit”), and — one of my favorites — Why must we write about ourselves? (“The Singular First Person” and “Honoring the Ordinary”).  Like examples plucked from Phillip Lopate’s text, The Art of the Personal Essay, Sanders’s writing exhibits all the hallmarks traits of the personal essay: intimacy, honesty, contradictions and expansions of self, “attempting to surround something — a subject, a mood, a problematic irritation — by coming at it from all angles, wheeling and diving like a hawk, each seemingly digressive spiral actually taking us closer to the heart of the matter,” and doing so in a conversational tone.

Indeed, Earth Works presents itself almost like an academic text (especially opening with an essay about ‘the essay’), the writing within clearly demonstrating Sanders to be a master of the craft.  The cadence of his prose is smooth and soothing, the vocabulary intellectual and wise without being pretentious.  The transitions between his sections are fluid, with just the right pause, like a gulp of air before swimming another gentle lap.  And yet, despite the tenderness of the tone, Sanders is still able to evoke a sense of urgency and alarm in his message — particularly about the tendency of people to impose violence against the Earth and one another, the loss of wildness and nature, the erosion of our connection to our planet.   His essays convey a seriousness without hostility, a profound disappointment in, instead of anger at, our misguided animal selves.  Rather than the high-pitched, alarmist, melodramatic environmental writing that the general readership has learned to tune out, Sanders’ work patiently and consistently reminds us: we are a part of this Earth, and this Earth is part of us.  Do you see how we are failing it?  Do you see how we’re failing ourselves?

How does Sanders do this?  How does he convey the magnitude of what we face without raising his narrative voice?  And how does he demand accountability to our surroundings without invoking an accusing tone?  This literary craft blog post examines two particular craft elements that Sanders employs to heighten his environmental message: the use of unexpected contrast to shock the reader out of complacency, and the deliberate interchanging of natural images with human gestures and conditions to illustrate our parallel needs.

Use of Contrast in “At Play in the Paradise of Bombs”

In his essay, “At Play in the Paradise of Bombs,” Sanders awakens his readers to the harrowing losses of war and environmental decay by juxtaposing dissimilar words and images in his text.  The piece itself examines Sanders’ childhood move, in 1951, from Memphis, Tennessee to the Army Arsenal in Northeastern Ohio, where he and other children of Arsenal employees and military personnel grew up playing in the shadows of a munitions plant.  The very title of this piece jars us with an array of words that are not supposed to fit together: ‘play,’ ‘paradise,’ and ‘bombs’.   Sanders carries this ‘contrast’ theme throughout the essay, peppering the prose with opposing images and words to illuminate the irony of our society’s accepted norms: neighborhood and Arsenal, children playing near ammunition, boys mimicking war, wildlife sanctuary and poison.  Of military machinery, he writes:

…On the front porch of our Memphis home I had read GI Joe Comic books, and so I knew the names and shapes of these death-dealing engines.  In the gaudy cartoons the soldiers had seemed like two-legged chunks of pure glory, muttering speeches between bursts on their machine guns, clenching the pins of grenades between their dazzling teeth. (p. 13-14)

The coupling of ‘grenades’ with ‘dazzling teeth’ underscores the glorification of war evident in Sanders’ boyhood toys, and the contrast of his innocent proficiency with the terminology of “death-dealing engines” signals the reader to pause and think: Why is it okay for a child to know so much about killing machines?

The reality of war, of course, is bone-chilling, and Sanders writes about “a needle of dread” settling in upon seeing real tanks on the compound, and driving past “guard houses manned by actual soldiers.”  Rather than the cartoon images of men and glory, Sanders learned that the Arsenal was “a fenced wilderness devoted to the building and harboring of the instruments of death.” (p. 14)

— Which brings us to another contrast: ‘wilderness’ (abundant life) and ‘instruments of death.’  Here, Sanders juxtaposes his childhood exploration of the woods within the Arsenal’s fortress against the environmental consequences of weapons production.  He recalls:

Even where the army’s poisons had been dumped, nature did not give up.  In a remote corner of the Arsenal, on land that had been used as a Boy Scout camp before the war, the ground was so filthy with the discarded makings of bombs that not even the guards would do there.  But we children went, lured on by the scarlet warning signs: DANGER.  RESTRICTED AREA.  …In my bone marrow I carry traces of the poison from that graveyard of bombs, as we all carry a smidgen of radioactivity from every atomic blast.  Perhaps at this very moment one of those alien molecules, like a grain of sand in an oyster, is irritating some cell in my body, or in your body, to fashion a pearl of cancer. (p. 16)

The opposing forces of words like ‘poisons,’ ‘Boy Scout camp,’ and ‘discarded makings of bombs’ or ‘children’ and ‘DANGER’ instill immediate concern in the reader’s mind: This was a place where children were taught to appreciate and survive in nature, how could they have allowed it to become a toxic and dangerous dumping ground?  Sanders even uses contrasting images to dramatize the health risks of the Arsenal’s chemical releases: a pearl, a rare and cherished commodity, with cancer, an ever-increasing and dreaded fatal disease.

Sanders’ successful manipulation of contrasting words and images throughout this piece allows him to maintain a consistent narrative tone while startling the reader to a new awareness.  Like the eerie coupling of childhood innocence with demonic possession in a horror movie, this technique of pairing opposing forces in an essay can foster frightening revelations.

The other craft technique that Sanders uses to nurture an environmental consciousness in his reader is his subtle, yet deliberate insertion of simile and metaphor into the prose to infer connection between the human condition and the natural world.  For instance, in “The Force of Spirit,” Sanders examines the concept of spirituality, pondering the force that wills people to live, the energy that can ripple over a landscape.  He describes the way his wife’s parents have aged and approached death, drawing comparisons with natural environmental rhythms to suggest that the “spirit” which drives our love of life is also the same force that makes rivers flow and seedlings burst through soil:

Ruth’s father, still able to get around fairly well back then, had just been to see Dessa in the special care unit, where patients suffering from various forms of dementia drifted about like husks blown by an idle breeze. (p. 239)

To say that [Ruth’s father] is dying makes it sound as though he’s doing something active, like singing or dancing, but really something is being done to him.  Life is leaving him.  From one visit to the next we can see it withdrawing, inch my inch, the way the tide retreating down a beach leaves behind dry sand. (p. 240)

The way Sanders compares ailing patients to “husks blown by an idle breeze,” and his dying father-in-law to a withdrawing ocean tide, implies an inherent connection of this human condition to the natural rhythm of the Earth.  And in so doing, the reader is compelled by extension, to consider the suffering or dying of a landscape to that of a fellow human being.  This inference is subtle, but real, and Sanders confirms this intention in his analysis:

…I want a name for the force that binds me to Ruth, to her parents, to my parents, to our children, to neighbors and friends, to the land and all its creatures.

The power is larger than life, although it contains life.  It is tougher than love, although it contains love.  It is akin to the power I sense in the lambs nudging the teats of their dams to bring down milk, in the raucous tumult of crows high in trees, in the splendor of leaves gorging on sun.  I recognize this force at work in children puzzling over a new fact, in grown-ups welcoming strangers, in our capacity, young and old, for laughter and kindness, for mercy and imagination.

…Whether we call that magnificent energy Spirit or Tao, Creator or God, Allah or Atman or some other holy name, or no name at all, makes little difference, so long as we honor it.  Wherever it flows — in person or place, in animal or plant or the whole of nature — we feel the pressure of the sacred, and that alone deserves our devotion.  (p. 242-243)

This union of human and Earth is the DNA of Sanders’ essays, and his interchanging of natural images with human emotions, gestures, and conditions is one of the signature traits in his outstanding body of work.