Between Faith and Religion: A Walk in the Woods 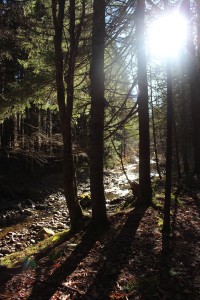 I’ve come here so that I might understand, so I might traverse a path with a religious name and not feel any hurt or anger or judgment. I’ve come here looking for peace.

This is not my first time in this place. The first time I came, several months ago, the forest was wet and green, and I was mourning, among other things, leaving my home in Oregon. It seemed like a good idea to go to the forest, even better to go to a place with a spiritual purpose.

The paths here are plentiful: Christian, Buddist, Pagan, Druid, Jewish, Muslim, Native American, and others — but I chose to only walk the Interfaith Path that day. It’s difficult to articulate why, exactly. Perhaps it was because I was already overwhelmed by the unfamiliar, and didn’t wish to explore any new religions. But if I’m honest, I must admit that I found myself avoiding the familiar Christian path just as much.

Maybe it was the way were were told to memorize Bible verses for candy bars at Awana when we were kids, the way we were always encouraged to bring a lot of friends. Or maybe it was the way my father delivered readings from the Bible after dinner — the snap to the forehead if we weren’t suitably engaged. Or perhaps it was the way my grandmother looked at me with her watery blue eyes when I chose not to receive communion at her church that particular Sunday. The way she sat firmly in the pew and rocked, eyes closed and whispering prayers for me so that I might be saved from the Lord’s disdain. I had felt the shame prickle down my neck, shame for acting honestly about what I didn’t feel. Shame for my unwillingness to participate in the pageantry.

Or maybe it was because of the grip that the vocal religious in this country continue to have upon my womb, upon my rights as a woman. Whatever the reason, I avoided the Christian path that day.

Nonetheless, I have returned to the paths today because I cannot ignore my spiritual thirst. I cannot ignore the crackling in the atmosphere from the wars being waged between religions.

It is November now, and the frost has made the bridges between the different paths dangerously slick. This autumn has brought death — I walk through red-brown leaves and pass the carcasses of broken trees. It feels sad, this season, but in truth, the nakedness sometimes makes it easier to see.

I walk the Christian path, the Muslim path. There are lots of places in this forest to stop and listen, to sit and contemplate. I am out here all alone, and I know it’s because I have the luxury of time, the time to walk and think, to read all the religious passages displayed before me. There are no messages of hate here, no calls for martyrdom to preserve extremist views, no sanctioning of violence. And what strikes me is how similar these paths really are — how I would not be able to distinguish one path from another were it not for the colored trail markers on the trees, the labeled signs along the way. Even the messages, regardless of the religion, all speak to our origins, how we might treat one another, how we should be stewards of our home, and where we go after we die. I wonder: how did we allow the values of humanity to become so distorted from one path to the next? 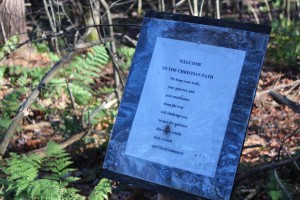 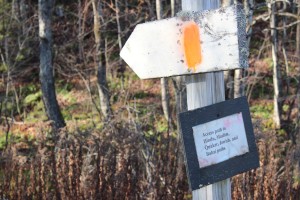 Many years ago, when I was in the second grade, a new student enrolled in my class, a student of Middle Eastern descent. I have long since forgotten his name, so I will call him M. Our teacher, accustomed to the white Protestant landscape of northeastern Ohio, had particular difficulty acclimating to this change in our classroom, and even as I longed to please her with my eager responses and careful cursive handwriting, I remember feeling embarrassed by how she treated M, how she always singled him out.

“I know you understand me,” she’d say, narrowing her eyes at him. “Don’t you play stupid with me.” She spoke in a way that made it seem like his failure to speak English, to rapidly assimilate into our classroom and our culture was a willful choice. Like he didn’t want to be the same as the rest of us, like he wasn’t already kind of the same. We didn’t learn much about where he was from, never sought out his country on the big world map. He was just from somewhere else, over there, not here.

To return to the car, I must follow the Muslim trail to its end, where it intersects with the Quaker Friends path, which connects to the access path leading to the Christian, Buddist, and Unitarian Universalist paths. I need these points of intersection to get back to my home, and as I walk to the parking lot, I am thinking that I should bring my girls here someday so they might see the way one faith can connect to another. I should bring them here so they might see the humility of faith against the backdrop of the earth. So they can see the difference between true faith and the institutions of religion. I want them to see the way the sun trickles through the trees to light up all the different ways.