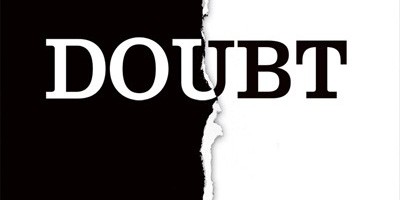 On the (Ab)use of Doubt

I haven’t told many people this story, but the persistence of doubt in the political arena of global climate change has my hackles raised (see Steven E. Koonin’s essay, “Climate Science is Not Settled” in the Wall Street Journal).

I know a thing or two about doubt.  I know the feeling, as an environmental scientist, of second-guessing my calculations, the nagging paranoia that I’ve based important regulatory decisions on incorrect assumptions.  And as a writer, I am well-acquainted with the metallic taste of self-doubt — of sharing too much, or not enough, or misjudging my aesthetic.  To a certain degree, I think it’s healthy to second-guess.  Keeps one from settling too comfortably on their haunches, so to speak.  But sometimes, the tendency to be uncertain can be hijacked by others with thinly veiled agendas.

In February of this year, right before I was to deliver a reading of an essay from Creative Nonfiction’s The Human Face of Sustainability contest, I was alerted by CNF editor Lee Gutkind and someone from the marketing staff of Arizona State University’s Global Institute of Sustainability that there was some controversy regarding my piece.  Not to worry, they said, discussion is good.  But they wanted me to know in case something came up during my reading.  Then they shared what others had said.

For those who haven’t read the piece, “Acts of Courage” explores the increasing incidence of childhood cancers juxtaposed against our increased use of toxic chemicals — the evidence of which is documented by the presence of chemicals in our water, soil, food, and other consumer products (listen to the podcast reading of the essay here).  Many of these chemicals are known and suspected carcinogens, others have been released into the marketplace and environment without sufficient testing.  In the piece, I make no specific accusations about cause and effect; rather, I simply weave the facts together, shine a light into a dark corner and ask, “Shouldn’t we be looking here?”

The news of my essay winning The Human Face of Sustainability contest ruffled some feathers — a few scientists and scholars (whose identities I choose not to reveal in the interest of professional dignity) who read the blurb about my piece in ASU’s press release and responded with surprising disdain.  I will spare you the details, but here are some of the phrases that were being kicked around: “Of course this is junk… I don’t know of any science that supports this scare mongering.”  “We don’t need science becoming magic. Traces of this and that will kill you.”  And my favorite: “It would seem that any prize for creative non-fiction should be for something that is actually non-fiction.”

Ouch.  I was certain I was about to be ambushed.

The threat of attack sent me into a manic state of self-doubt, and I scoured my research to double-check the statistics and prepare for my reading as if it were a thesis defense.  These were scholars, after all, people with a helluva lot more academic credentialing than me.  At some point though, late in the night before my reading, when my anxiety had reached critical mass, I decided to focus my research on my attackers instead.

Sure enough, the special interests began to emerge — representatives of, and affiliations with institutes and organizations against chemical regulation, funded by petroleum, chemical, and pharmaceutical industries.  I had just experienced firsthand the strategic employment of doubt, the attack-via-uncertainty.  The defensive offensive.

This is a card frequently played in the environment-verses-industry game, the latest round evident in Steven E. Koonin’s “Climate Science is Not Settled” piece — which is, of course, being applauded by fossil fuel lobbyists (for more discussion, see Andrew Revkin’s blog post “Certainties, Uncertainties, and Choices with Global Warming” at Dot Earth).  Better not do anything about climate change… the science is still uncertain.  Score one for the status quo.

But here’s the thing we need to understand: while scientific uncertainty is a valid topic to wrestle and discuss, it is currently being (ab)used as a ploy to distract from the real issue at hand — by which I mean the ethics behind our culture’s approach to things like chemical regulation and climate change.  Ethical questions such as: Is it morally acceptable to burden future generations with providing the evidence of harm?  Or as Kathleen Dean Moore and Michael Nelson have asked in their co-edited book, Moral Ground: Do we have a moral obligation to leave future generations with a world as rich in possibility as the one that was left to us?  These are the questions that should drive our actions, and they are exactly the ones environmental opponents seek to avoid.  Why? Because their answers are less susceptible to doubt.

Despite the uncertainty, I do believe that the scientific evidence of human-caused global climate change is solid, as is the scientific argument for using the precautionary principle in chemical regulation.  The data glare at us like a mid-day sun, and the doubt cast by climate deniers and other industry loyalists is a tactic — just a moment in time when the sun is obscured by the moon.  There was a time when people were afraid of the solar eclipse.  Today we should know better than that.